Driving on Interstate 15 in Nevada, one wouldn’t expect such a stark contrast to exist in the desert landscape. Yet, this duality of color and feeling is very real. It has been a popular public art installation near Jean Dry Lake since 2016.

Seven Magic Mountains is by Swiss artist Udo Rondinone. As he puts it, he wanted to build upon the art history known as Land Art from this exact location during the 1960’s and 1970’s. However, rather than have his work blend in with its surrounding, as land art was known for, he wanted to highlight ideas of contrast and duality. In order to create those feelings Rondinone utilized Pop art concepts into his installation. 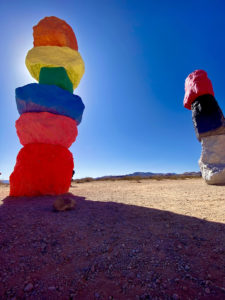 The creation of Seven Magic Mountains

The work began in 2015, with boulders being selected, cut, cored for stacking, and painted in 2016, which is the first year Seven Magic Mountains was open to the public. Rondinone’s idea for stacking boulders was inspired by the hoodoo rock formations which can be found around the world.

Using artificial DayGlo flourescent colors were his way of incorporating Pop Art and to express the contrast against the desert. He stated, “when you put something in contrast, it elevates the other parts.” This duality of natural and artificial, human and nature, is instantly felt and experienced when in their presence.

My favorite part of Ugo Rondinone’s inspirations for this installation is that he wanted it to be on public grounds. He wanted anyone to experience it. As I made my way around each of the Magic Mountains, that is just what I noticed. People of all ages were looking up, touching, feeling, connecting. They would look out at the vast expanse of the desert surrounding them, then looking back at the colorful towers.

It is a magical experience indeed. Unfortunately, 2021 may be the last year that Seven Magic Mountains will be on display. So if you have the time make it part of your next Nevada trip.

I will end this post with a quote from Ugo Rondinone about his Seven Magic Mountains:

” Color is a way to relate to people, and towers, everybody-a child or every person can relate to colors and towers. The work is not an intellectual work, it’s something that you have to feel with your body as you approach.” sevenmagicmountains.com

If you enjoyed this post, you can also read Chifa Cuisine